Failcamp, Librarycamp and the power of unconferences: An interview with Sue Lawson and Richard Veevers

15th Aug 2019
Failcamp is an unconference event celebrating failure in all its many, glorious forms. We recently asked organisers Richard Veevers and Sue Lawson to share their thoughts and experiences with Failcamp, Librarycamp and why you should run your own librarycamp right now.

What’s been happening since Failcamp 2018 in Manchester?

Richard: Work! I’m lucky enough to have a job I love and keeps me busy. Sue’s busy with a new role running Time to Read. In September 2018 we took #Failcamp to Next Library Berlin. We met Lotta Muurinen from Helsinki Libraries at Next Library 17 and, literally, bumped into her again in Berlin where plans were made. Lotta organised Reshape, the first conference at Helsinki’s Oodi. Seeing something constructive in #Failcamp, Helsinki Libraries called on us to run one for the Reshape attendees. Our support of libraries is extra curricular, so I'm sure you can appreciate how important this was for us, after self funding all our previous conference activities.

Sue: Jo McCausland organised the first Librarycamp. In 2011 Jo noticed my library social media work and Richard impressed with a prescient presentation for Lancashire Libraries. We were on the team. Three months later 150 people met in Birmingham, on their day off, for Librarycamp #1. Awestruck by it all, the power of self organisation, we continued #LibCamping for a few years. At the same time we went to a lot of conferences presenting on librarycamp and about unconferences.

All these professional conferences were great and we got in for free, it's not usually possible for staff at our level to afford a conference pass. Every conference session talked about successes and how great everything was in library land. Yet in the libraries we worked, only a tiny minority of the eligible public, like 5%, used us regularly. In Aarhus we laughed about a conference where people only talked about what went wrong, #Failcamp was born! What started as a joke became more serious, it could be cathartic and confessional, a place to take failure seriously and smile. Around this time we discovered Museum of Failure, Fuck Up nights and a Swedish library Failcamp. The omens seemed right so we organised the Failcamp in Manchester, then went on to deliver a couple of Failcamps at Next Library Berlin in September 2018. There was a quick and dirty Failcamp session at in January 2019 at UK Gov Camp and then we went to the Reshape conference with a Failcamp for 180 people in the brand spanking new Oodi Library in Helsinki.

Are there still Librarycamps happening? Or has this now been superseded by Failcamp?

Sue: The idea was always, build your own Librarycamps. We haven't directly organised one for a few years, but anybody can. Our goal was to create lots of Librarycamp organisers. There’s no Librarycamp organisation, you don't need permission. Insert highly motivating call to action here. BUILD YOUR OWN LIBRARYCAMP NOW!

Richard: Last month we thoroughly enjoyed introducing LibraryCamp and unconferences to Libraries Connected NW. Unconferences are resistant to description at the best of times and we were also making the case for decentralised, flattened management structure. An obscure idea to express as a PowerPoint, we think we turned a few heads, maybe a couple of stomachs?

When we see that more than half of UK employees are expected to experience chronic workplace stress, or ‘burnout’, and productivity, particularly in local government, continues to struggle the need for cheap, effective, proven solutions increases. AFAIC

The theme of Librarycamp was to improve libraries - what is one improvement you’d like to see right now.

Richard: Harrogate's National Library Conference has shown the scope and potential for a Public Libraries Festival. To be clear, a public libraries festival, not excluding academic or other types, centred very much on, public libraries. Our #publibfest14 was a festival to celebrate 50yrs of the UKs Public Libraries Act, imagine how popular that could be now? A showcase of the best current and traditional public libraries had to offer. The idea encompassed an unconference for public librarians with live music, write-offs (head to head competitive literature) 3D Printing & Maker spaces (it was 2013), networked FPS gaming, crafts, comics, zombies and all things cultural and creative.

You recently asked people (on Twitter) about their favourite Librarycamp moments. Any that really stood out for you?

Richard: Are we allowed to swear? I organised a session called “Fuck off you cunt!” There’s a lack of recognition about verbal abuse. I wanted to share stories for support, to offer badly needed, much appreciated, help and advice with other campers.

The Red Quadrant sessions were particularly “animated” some enthused by their ideas, others upset by the imposition of a commercial company into the public sphere.

Ian Anstice recently questioned the lack of public libraries common ground on something as simple as what we call the people who use the library. Initially simple and banal, the question quickly gets out of hand and explodes into dozens more questions. Exactly like the best kind of unconference session, a session we had about that back in 2011:)

No hierarchy
Self organised chaotic anarchy
Plethora of sessions, law of two feet.
Endless possibilities
Serendipity
We family & best friends.
Tell us about your favourite, most treasured fails? (these don't have to be your own).

Richard: As bragged about earlier, #PubLibFest. Everyone agreed it was a great idea, but we couldn’t gain the necessary momentum. It was heartbreaking to see the 31/07/2014 golden anniversary for the UKs Public Libraries Act come and go. I’m frustrated with the lack of uptake from public librarians, the ones that came to our camps, enthused about the event and made us even more certain that the camps worked.

I found the logistics and production of the events simple, compared to persuading campers to take the baton and set up their own camp, library or otherwise. At the end of #LibCamp2011 Jo McCausland held a session on #LibCamp2012 I couldn’t believe how few people were interested, how quickly I found myself involved with grant applications and venue visits.

Richard: Joyce & Rob from the wonderful Ministry of Imagination (not an actual government ministry, they hasten to add) have recruited #FailCamp for an event in Den Bosch. We’re in contact with Libraries Connected, we’d love to get involved with unconferences for public librarians again, it’s what we’ve always worked towards.

Sue: I hope unconferences will be something all libraries do, locally, nationally and internationally. After eight years I still consider unconferences a radical act - productive, creative and full of potential. When we did the first Librarycamp it worked; 200 people created a day long agenda of 25+ sessions in under an hour with little fuss and no argument. Unconferences work because self organisation works.

Posted by Richard Veevers at 15:14 No comments:

Interview with Eimer from Bibliotheekblad 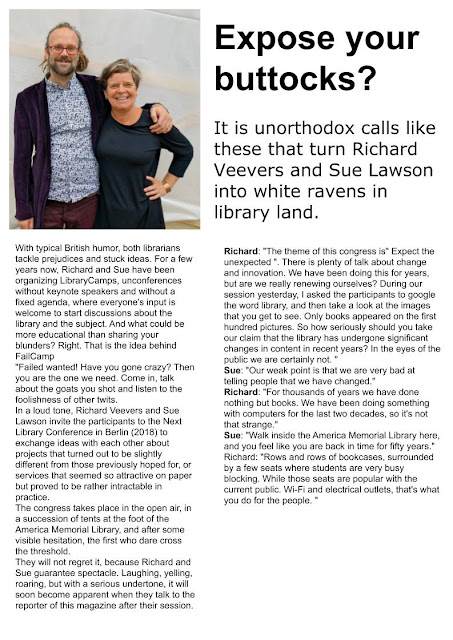 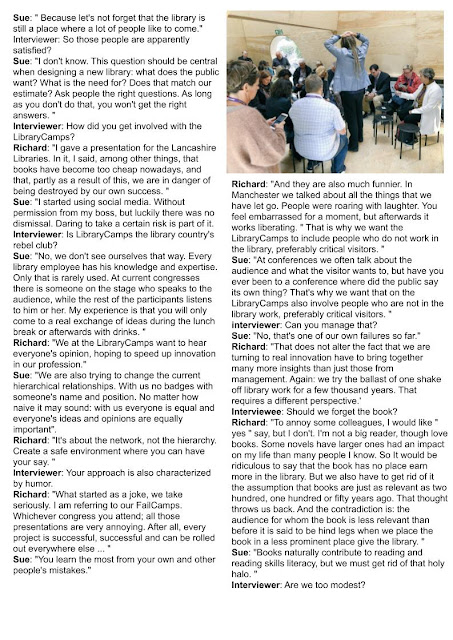 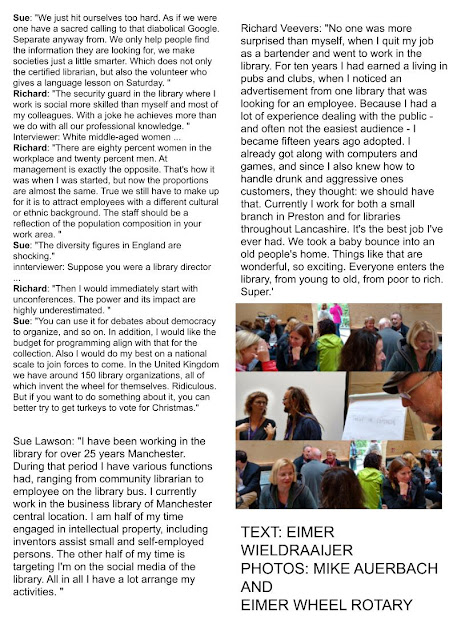 Posted by Richard Veevers at 22:04 No comments:

Come to Failcamp!
The UK's first, free unconference about failure.
Share stories of failure, flops, fiascos and frustrations. Support
your courageous colleagues taking the stage.
Inspired by our failed success, LibraryCamp, our Nederlander & Svenskar
collaborators; the Museum of Failure; the reams of research and
recent recognition about failure, we present FailCamp.
Following Open Space Technology, we’ll first meet up as one group.
Anyone will then have an opportunity to share (confess?) their chosen
fail and invite others to join a smaller group for an hour, investigating
it. Your fail can be personal or professional, owned or anonymised,
it must be yours.
FailCamp wants to advocate for failure, a catharsis where failure
is laughed at and a safe place to take it seriously.

Posted by Richard Veevers at 13:29 No comments:

Our statistics are stories

Engagement was the name of the game at the Next Library conference held in Aarhus, Denmark, June 11–14. Some 350 librarians from 36 countries gathered at the city’s Dokk1 library to learn and continue to build a global network. Via high intensity, participatory programming such as that offered by creativity expert Christian Byrge and in breakout sessions, attendees were very much part of the program.
via IFTTT
Posted by Unknown at 15:59 No comments:

The Internet has a Cat!

Meet Purrli, the Online Cat Purr Generator.
via IFTTT
Posted by Unknown at 15:59 No comments:

Instagram Stories are a relatively new feature introduced by Instagram in August 2016. Many saw them as playing off of the popularity of Snapchat, as they are essentially the same idea. On Instagram, the Stories feature allows users to post a photo to their “Story,” where it will remain for 24 hours. The photo can either be taken within the app or uploaded from the camera roll (although it has to have been taken in the past 24 hours).
via IFTTT
Posted by Unknown at 15:59 No comments:

A Librarycamp is an unconference for people who want to improve libraries.

At a camp the participants lead the agenda – in fact, there isn’t an agenda until people make suggestions for what they’d like to talk about at the start of the day.

There's no cost, there are no keynotes and we're a PowerPoint free zone. Librarycamp is open to anyone: public/private/whatever sector and you don't have to work in a library.